Posted by Jeremy Sasser on November 2016

California professionals now have another certification option in growing field 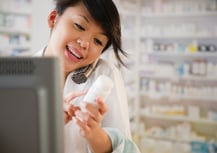 LEAWOOD, Kan. (November 2, 2016) – The state of California now recognizes National Healthcareer Association’s (NHA) Exam for the Certification of Pharmacy Technicians (ExCPT®) as a pathway to licensure in this growing field. Prior to the California State Board of Pharmacy (the Board) approving the ExCPT on October 27, the state accepted only one such certification option.

“The approval of the ExCPT exam provides greater access to pharmacy technician jobs in California, where demand for these critical healthcare positions is growing,” said Steve Gray, Kaiser Permanente’s pharmacy professional affairs leader. “Kaiser Permanente applauds the Board of Pharmacy for recognizing the ExCPT and giving applicants more than one technician certification option.”

“NCPA is pleased with the recent decision of the California Board of Pharmacy to add the ExCPT exam to its list of approved pharmacy technician certification exams,” said National Community Pharmacists Association CEO B. Douglas Hoey, RPh, MBA. “Community pharmacy owners in the state will appreciate having the option of an additional approved exam and the larger pool from which they can hire technicians qualified to support dispensing operations, patient care programs and sterile and non-sterile compounding.”

In considering the ExCPT, the Board reviewed a report released in January 2016 by the California Office of Professional Education Services (OPES). OPES evaluated both the ExCPT and the other national certification examination in the state for psychometric soundness and concluded that both exams were developed in accordance with recognized standards.

The SME panel concluded that the ExCPT measured a candidate’s job readiness more effectively than the other national exam, saying it “captures a broader range of practical knowledge required of entry-level pharmacy technicians.” The SMEs further noted that the “knowledge tested on the ExCPT represents a broader middle ground that addresses both retail and hospital settings.” Another key SME panel finding was that the ExCPT’s “emphasis on the prevention of medication errors enhances patient safety.”

“We’re pleased that California has approved the ExCPT a direct route to a pharmacy technician license,” said Lyndsey McDonald, director of strategic alliances, ExCPT, at NHA. “It’s testament to NHA’s commitment to upholding rigorous exam standards that assess practitioner competency and our significant investments to maintain the highest-quality certification programs.”

Accredited by the National Commission for Certifying Agencies (NCCA), the NHA ExCPT is recognized by numerous Boards of Pharmacy throughout the United States. The NHA regulatory and advocacy team works with regulators, legislative representatives and healthcare professionals to advocate for access to a better future for those pursuing a frontline healthcare career such as pharmacy technician.

Explore publications written by skilled and trusted industry experts, supported by robust survey data that not only gives you data, but insight packed with info you are excited to share with your students, your colleagues and your peers.

NHA’s proven results elevate and impact the lives of individuals, schools, and businesses in allied health. Our comprehensive certification and preparation resources provide our clients with access to the professional success they desire. NHA provides continuity for educators and employers seeking a partner with multiple certification options, giving students and employers a trusted path to skills growth and career advancement.