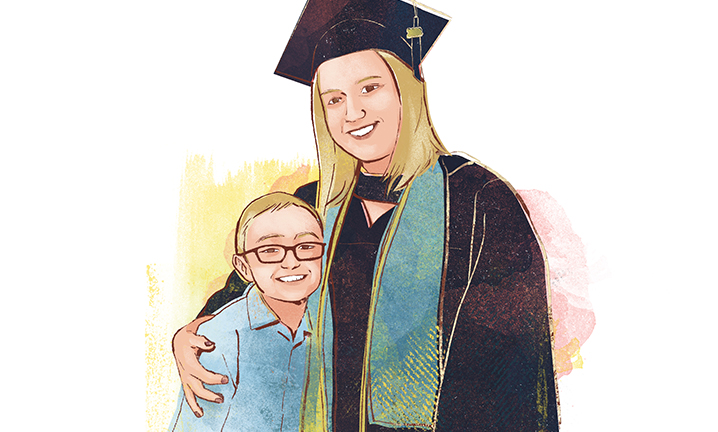 Nearly 18 years ago as a teenager, Jamie Bornt began working as a cashier at her local Hannaford grocery store. Over time she earned a promotion to manage the customer service department, where she excelled in meeting the needs of customers. As a star employee, Bornt’s talent and demeanor caught the attention of the store’s pharmacy manager.

Bornt was in college to become a medical administrative assistant when Brent Conlee, a pharmacist and manager of the pharmacy at Hannaford, approached her with a question: would she consider applying for a pharmacy technician role on the pharmacy team?

“Jamie is so approachable and has a great handle on the customer service aspect. That’s why we wanted to have her take on a full-time role in the pharmacy,” explains Conlee.

Bornt saw the opportunity and what it would mean for her and her family. In addition to fitting nicely with her studies, the role offered her a full-time, Monday–through–Friday schedule. Bornt took the job, welcoming the challenge that the pharmacy technician role offered. A bonus was that her new schedule would allow her to spend more time with her son. She knew she wouldn’t have to miss as many baseball games and other evening and weekend activities.

Advancing into a new career

Once in the pharmacy, Bornt knew it was a good fit. She was able to apply what she was learning on the job to her school work. She also decided, with the support of Conlee, to pursue national certification.

She began studying for NHA’s ExCPT exam to earn her certified pharmacy technician credentials (CPhT). Because she was so new to the pharmacy industry, she ran into some challenges along the way. Throughout her preparation for the exam, Bornt turned to her team for support.

“When Jamie had a challenge in studying, another pharmacist or I would work with her, going through certain types of problems, to coach her and help her gain confidence,” explains Conlee.

Bornt found that in studying for the exam, she was able to learn new pharmacy concepts that she hadn’t yet experienced.

Taking the next step up

Bornt’s commitment to her work didn’t go unnoticed by the management team at Hannaford. In less than one year after earning her credentials, she was approached for a promotion to be the district trainer.

“Jamie has a great ability to teach and explain things. She’s very patient. This made her a great candidate for the training role,” says Conlee. “She knows how to put things in plain terms so everyone can understand. She’s always upbeat and she’s an excellent employee.”

After taking the promotion, Bornt now serves 11 different Hannaford stores in her district. When stores in her district hire pharmacists or pharmacy technicians, Bornt helps them get up to speed. For newly hired pharmacists, Bornt trains them on Hannaford’s standard practices and technology. For newly trained technicians, she helps with their on-the-job training, and is the final sign-off to ensure technicians are adequately trained for the job. Lastly, Bornt is actively involved in helping her designated stores prepare for and execute the physical inventory process biannually.

“Getting certified within a year is one of the things I am most proud of. I’m also pretty proud that I was able to grow into my role as regional support technician trainer within three years,” Bornt says.

Though she is still relatively new to the world of pharmacy, she’s eager to continue growing her career.

For those who are considering a career as a pharmacy technician, she encourages certification as a starting point: “Stick with it. It’s not as easy as you may want it to be, but it’s definitely worth it.”

How do you train those with who show great potential like Jamie, but lack experience? Learn more about PharmaSeer™, an online learning resource to help technicians in training learn the foundational skills to make them a success in any pharmacy setting.