My Life as a Pharmacy Technician

During my career, the practice of pharmacy has changed … A LOT. In honor of Pharmacy Technician Day I am going to share my journey into the profession. 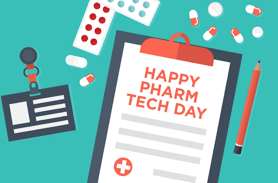 How My Career Began

January 8, 2000. It was a Saturday, I was a scared 16-year-old, and it was the first time I had donned a white smock. Back then, there were no certification or licensure requirements, let alone high school diploma requirements; I was truly there to learn by fire.

Compared to many of my peers, I was very fortunate to have a job with flexible hours, primarily working on the weekends and evenings. I had a job where I was learning marketable skills, as well as growing personally and professionally. Best of all, I was serving the needs of many in my community. Unlike visiting the video store, or the local “greasy spoon” restaurant, customers who came to the pharmacy did so out of need - some more than others - but “need” was the commonality.

The Evolution of the Industry

This was a time when there was more than one COX-2 inhibitor on the market (Vioxx and Bextra) to compete with Celebrex, and the relatively new class of statins was enjoying popularity and patent protection, and even Baycol had not yet been removed from the market. It was also a time when coordination of benefits billing required handwriting Universal Claim Forms on carbon-copy paper (a task I dutifully performed on Sundays), and flu shot clinics were held near the pharmacy by contracted nurses because pharmacist-administered immunizations were virtually unheard of.

But as I age myself, I’m also shedding light on how much pharmacy practice has evolved — even regarding national technician certification. When I took my exam in 2001, not only was it“paper and pencil,” but I also had to wait six weeks to find out whether or not I passed!

My career started out behind the counter. After earning my degree, I took more of a full-time position and began being more involved in day to day pharmacy operations. I continually pushed my supervisors to give me more responsibilities, and sought opportunities to get more involved through state pharmacy associations and other trade organizations.

Then I took on an additional part-time job instructing pharm tech courses, and eventually became a program director for a community college program. Eventually, I was promoted to a corporate pharmacy position where I learned and took on a variety of business-related roles in operations, managed care, procurement, and eventually managing a specialty pharmacy line of business that my company acquired. Now, I’m in a role I absolutely love, as the Pharmacy Content Strategist for NHA.

Being an Advocate for Your Career and Future

Pharmacy Technicians’ Day is upon us once again, and I would also ask that you take a moment to reflect on your own career. Are you where you want to be? What more do you want to do? What additional training and/or credentialing is available?

As technicians, we need to be more proactive when it comes to advancing our profession. We must bring a unified voice to state boards of pharmacy, as well as state and national pharmacy associations. In the end, if technicians are to demand better opportunities, and a higher level of recognition that is deserved, it will be on the shoulders of technicians, everywhere, to make it happen.

As I reflect on my career and all the changes that have occurred in the pharmacy world, I’m proud of the progress and also excited for the opportunity the future holds. Thank you to every pharmacy tech out there for your dedication to your patients and the safety of the medication use process, and for leading the way in the future of this profession.