The weird history of phlebotomy

Modern phlebotomy has ancient roots in bloodletting. Keep reading to learn about the weird history of this strange practice.

Bloodletting is what it sounds like. It’s a withdrawal of blood. In ancient times, this was usually done with a knife.

How was this a thing?

Bloodletting is an ancient medical practice, but its origins weren’t sound.

Let’s go way back, way back, to Hippocrates around 460-370 BC. Hippocrates believed that there were four basic elements that related to four “humors” in the human body, and each of these humors was centered in a specific organ.

If someone was ill, it was believed there was an imbalance in one of the four humors. The treatment was to remove some of the excessive humor through bloodletting — removing blood — or other similar removal treatments such as purging.

It wasn’t just Hippocrates who did this. It become widely practiced by physicians for centuries. Egyptians (who actually started the whole thing), Greeks and Romans all over Europe throughout the medieval era used bloodletting for all kinds of illnesses.

Besides Hippocrates, another big name in bloodletting is Galen. He was the first to discover that it wasn’t only veins that carried blood, but arteries as well (which were previously believed to only hold air). However, he didn’t believe that blood circulated, and that it could stagnate in extremities. His solution? Bloodletting. He developed a whole system for it and even created “do it yourself” instructions. Can you imagine?

Your barber … and local bloodletter?

Eventually, the humoral system stopped being used. But bloodletting continued to be used by surgeons and barbers. Yes, barbers. A physician would recommend bloodletting but often it would be carried out by a barber. In fact, the red in the red-and-white striped pole of the barbershop often used today was meant to represent blood (and the white, bandages).

It turns out, treatment to balance the humors wasn’t humorous. It often led to further complications or death. It lost some momentum in the second half of the 17th century, but was still practiced and even evolved into different forms such as leeching. As a popular practice in the 18th century, leeches would suck blood out of a patient’s skin until they fainted — which was considered to be a good thing. Yikes. Leeches are actually still used to treat some illnesses, but it’s not nearly as common and fainting is not the goal.

Thanks to scientific research, it’s been accepted that bloodletting is not a good idea. There are a few rare diseases that can be effectively treated by bloodletting — but it is practiced in hospitals by highly trained professionals, not barbers. Phlebotomy, on the other hand, is a common practice.

Phlebotomy — a far cry from its distant relative, bloodletting.

Phlebotomy involves removing small amounts of blood from a patient for diagnostic purposes. A phlebotomy technician today may perform the following: 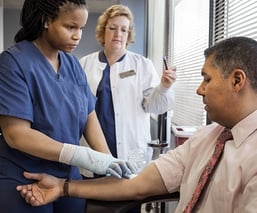 Although phlebotomy is much less intimidating than the historical form of bloodletting, blood and needles cause fear and anxiety in many people, making a phlebotomy technician’s role especially important.

If you think the phlebotomy field is right for you, learn more about the certification process and take a step toward your new career path.